28 Sep The importance of the Great British Breakfast bap!

Posted at 13:25h in Bakery Blog by Friary Mill 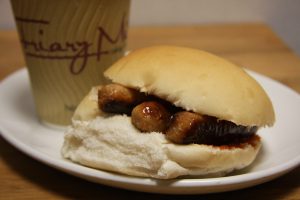 Feeling hungry; have you tried the Breakfast Bap?  –  Available in ALL our shops and now being served!!
Saturdays: 9am – 12pm, at The Factory Shop, Cattedown.

The traditional English breakfast is a national institution. Most of us love a full English breakfast; you can even travel abroad, to the Mediterranean resorts in Spain for example, and find this quintessentially British dish on sale in cafes and restaurants.

Sometimes also called a ‘fry-up’, the full English breakfast consists of fried eggs, sausages, back bacon, tomatoes, mushrooms, fried bread and often a slice of white or black pudding (similar to bloodwurst). It is accompanied by tea or coffee and hot, buttered toast. These days, breakfast may also include other items such as baked beans and hash browns.

There are many regional versions of this staple. For example, the Ulster Fry includes Irish soda bread; the Scottish breakfast boasts a tattie scone (potato scone) and even maybe a slice of haggis; the Welsh breakfast features laverbread (barra lawr, made from seaweed); and the Cornish breakfast often comes with Cornish hogs pudding (a kind of sausage).

The tradition of breakfast dates back to the Middle Ages. At this time, there were usually only two meals a day; breakfast and dinner. Breakfast was served mid or late morning, and usually consisted of just ale and bread, with perhaps some cheese, cold meat or dripping.

A lavish breakfast was often served by the nobility or gentry at social or ceremonial occasions such as weddings. A wedding mass had to take place before noon, so all weddings took place in the mornings. The first meal the new bride and groom ate together would therefore be breakfast and became known as the ‘wedding breakfast’.